CCNA 2 Chapter 10 Quiz Questions and Answers. In this simulation, take your test, get your score and share with others!

Check all the CCNA exams in THIS SECTION.

Which statement is true about CDP on a Cisco device?​

CDP is a Cisco-proprietary protocol that can be disabled globally by using the no cdp run global configuration command, or disabled on a specific interface, by using the no cdp enable interface configuration command. Because CDP operates at the data link layer, two or more Cisco network devices, such as routers can learn about each other even if Layer 3 connectivity does not exist. The show cdp neighbors detail command reveals the IP address of a neighboring device regardless of whether you can ping the neighbor.

A network administrator has issued the logging trap 4 global configuration mode command. What is the result of this command?

The logging trap level allows a network administrator to limit event messages that are being sent to a syslog server based on severity.

Refer to the exhibit. Match the components of the IOS image name to their description. (Not all options are used.) 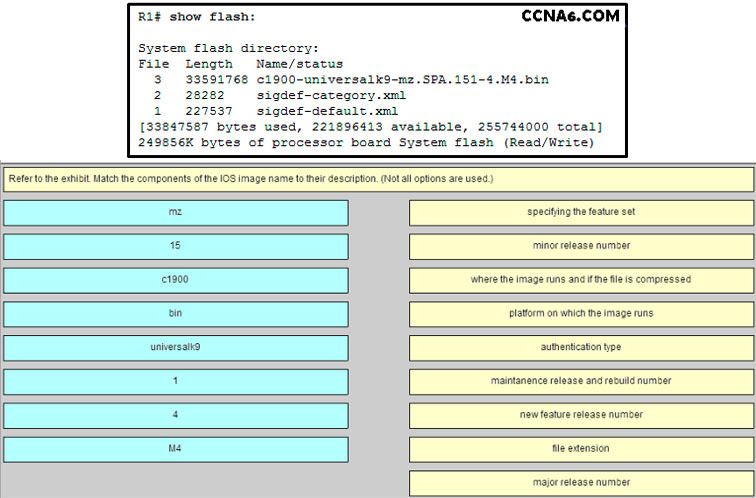 Refer to the exhibit. Which two conclusions can be drawn from the syslog message that was generated by the router? (Choose two.)

The message is a level 5 notification message as shown in the %LINEPROTO-5 section of the output. Messages reporting the link status are common and do not require replacing the interface or reconfiguring the interface. The date and time displayed at the beginning of the message indicates that service timestamps have been configured on the router.

Which command is used to configure a one-time acceptance of the EULA for all Cisco IOS software packages and features?

Which two conditions should the network administrator verify before attempting to upgrade a Cisco IOS image using a TFTP server? (Choose two.)

Refer to the exhibit. Routers R1 and R2 are connected via a serial link. One router is configured as the NTP master, and the other is an NTP client. Which two pieces of information can be obtained from the partial output of the show ntp associations detail command on R2? (Choose two.)

With the show NTP associations command, the IP address of the NTP master is given.

Which two statements are true about NTP servers in an enterprise network? (Choose two.)

Network Time Protocol (NTP) is used to synchronize the time across all devices on the network to make sure accurate timestamping on devices for managing, securing and troubleshooting. NTP networks use a hierarchical system of time sources. Each level in this hierarchical system is called a stratum. The stratum 1 devices are directly connected to the authoritative time sources.

When a customer purchases a Cisco IOS 15.0 software package, what serves as the receipt for that customer and is used to obtain the license as well?

A customer who purchases a software package will receive a Product Activation Key (PAK) that serves as a receipt and is used to obtain the license for the software package.

What statement describes a Cisco IOS image with the &##8220;universalk9_npe” designation for Cisco ISR G2 routers?

To support Cisco ISR G2 platforms, Cisco provides two types of universal images. The images with the “universalk9_npe” designation in the image name do not support any strong cryptography functionality such as payload cryptography to satisfy the import requirements of some countries. The “universalk9_npe” images include all other Cisco IOS software features.

What is used as the default event logging destination for Cisco routers and switches?

Refer to the exhibit. From what location have the syslog messages been retrieved?

The output is captured from a virtual terminal connection on a router. The syslog messages are stored in the RAM of the monitored router.

Which three software packages are available for Cisco IOS Release 15.0?

Beginning with the Cisco IOS Software Release 15.0, which license is a prerequisite for installing additional technology pack licenses?

Cisco IOS Software release 15.0 incorporates four technology packs. They are IPBase, DATA, UC (unified Communications), and SEC (Security). Having the IPBase license installed is a prerequisite for installing the other technology packs.

A network administrator configures a router with the command sequence:

What is the effect of the command sequence?

The boot system command is a global configuration command that allows the user to specify the source for the Cisco IOS Software image to load. In this case, the router is configured to boot from the IOS image that is stored on the TFTP server and will use the ROMmon imagethat is located in the ROM if it fails to locate the TFTP server or fails to load a valid image from the TFTP server.

Which command would a network engineer use to find the unique device identifier of a Cisco router?

The license install stored-location-url command is used to install a license file. The show version and show running-configuration commands display router configuration and other details, but not the UDI.

Why would a network administrator issue the show cdp neigbors command on a router?

The number following the date represents the time that the syslog message was issued.

In addition to IPBase, what are the three technology packs that are shipped within the universal Cisco IOS Software Release 15 image? (Choose three.)

Which syslog message type is accessible only to an administrator and only via the Cisco CLI?

Syslog messages can be sent to the logging buffer, the console line, the terminal line, or to a syslog server. However, debug-level messages are only forwarded to the internal buffer and only accessible through the Cisco CLI.

What code in the Cisco IOS 15 image filename c1900-universalk9-mz.SPA.153-3.M.bin indicates that the file is digitally signed by Cisco?

A network engineer is upgrading the Cisco IOS image on a 2900 series ISR. What command could the engineer use to verify the total amount of flash memory as well as how much flash memory is currently available?

The command ntp server 10.1.1.1 is issued on a router. What impact does this command have?

Which protocol or service allows network administrators to receive system messages that are provided by network devices?

Cisco developed NetFlow for the purpose of gathering statistics on packets flowing through Cisco routers and multilayer switches. SNMP can be used to collect and store information about a device. Syslog is used to access and store system messages. NTP is used to allow network devices to synchronize time settings.

Congratulations, you have completed the Chapter 10 Exam of CCNA 2! Tell us your rating!